Heritage, Rodeos and the Bar U Ranch

Happy Heritage Day! Of course, all of August is a great time to continue celebrating of our heritage. So, why not enjoy the rodeo next weekend at the Bar U Ranch. On August 9th, you can experience the best in Alberta ranch history and take in a  rodeo, too. What combination!

Local cowboy competitions held at various ranches were the real beginnings of rodeo and stampedes throughout the West. The popularity of those community events, which appeared earlier in the USA and spread to western Canada by the last half of the 1800s, was inevitable.

The Bar U Ranch National Historic site is where this old-time, ranch rodeo will be held. Initially owned by the North West Cattle Company, eventually, George Lane purchased all of the holdings of the Bar U. As early as 1893, for the summer agricultural fair in Calgary, George Lane organized a steer roping, and one of his cowboy competitors was John Ware. A black cowboy, Ware worked at the ranch and was known as an outstanding bronc rider. In the steer roping competition, he roped and tied his steer in 51 seconds. Clearly, the Bar U has a long and proud history of rodeo and ranch-related competitions.

Located in Alberta’s scenic foothills, about a 90 minute drive southwest of Calgary, the ranch is west of the junction of Highway 22 and 540. Once you arrive, you will have lots of opportunities to learn about the history of the ranch. Celebrating its 20th year as a Parks Canada historical site, the Bar U is the only national site to commemorate our ranching history.

It remains a working ranch of about 148 hectares (367 acres) with a small cattle herd, saddle horses and some Percherons work horses. As such it is part of our living history. Yet, at one time, the ranch could boast of 160,000 acres of grassland, crucial for grazing the 30,000 head of cattle and 1,000 head of Percherons. Of course, that meant work for countless cowboys. Once the round-ups were done and other work manageable, it was time for the cowboy competitions. But which cowboys and ranches could claim to be the best of the bunch? Serious competition decided bragging rights.

That day, I’ll be signing books at the gift shop, so if you plan on attending the event, be sure to drop by and say, “Howdy” or even just “Hi.”

For more information, go to http://www.friendsofthebaru.com. For great photos, click on the photos

I recently returned from being a guest with Alberta Prairie Railway Excursions in my hometown of Stettler, Alberta. I loved the train ride, and I celebrated my mom’s family roots in Big Valley, the destination station for the excursion. The village was celebrating its 100th anniversary, and I showed some Powerpoint images and talked to visitors during the stop-over. I highly recommend the excursion for train buffs and those who enjoy wandering through the small villages that are a vibrant part of our rural heritage. There is plenty of time. So check out www.absteamtrain.com. 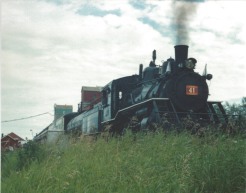 I was first on the train in 1991. Two years previous, Bob Willis and Don Gillespie, both of Stettler, made their dream of operating a heritage train come true. After 25 years, they have made their own history, and their trains attract countless visitors.

Honoured to be on the train this year, the journey brought to mind some earlier writing I did for Awed, Amused and Alarmed.  Bob’s grandfather owned the local paper, the Stettler Independent, and he covered local events. In the summer, the fair and rodeo were important events to the community.  Mr. Charles L. Willis seemed to be was one of the few newspaper men who wrote about women’s participation. In the 1930s, not surprisingly, much of their participation meant volunteering or submitting to the “homemaking” competitions. Willis’s work was true to the time frame, but I remember having a laugh when reading his coverage. He wrote:

“No mere man can afford to give a description of  the Ladies’ Work….” the newspaperman wrote. With a tongue-in-cheek tone, he continued, “He is quite incapable for the job…. For example, what does he know about pillow slips except as a place to lay his head on. His ignorance of embroidery work, of crochet work, or of tatting particularly is colossal. All he knows is that the work looks good and is good, while in the case of the cooking department it also tastes good.”

The viewpoint was standard for the time, but his humor was most enjoyable.

“Unfortunately, from one standpoint, most of the prize winners were married,” he wrote. “This is satisfactory as far as it goes but gives no opportunity to build up the community by paving the way for future weddings. The single girls have overlooked a golden opportunity in not exhibiting more of their fancy work and cooking at the Exhibition. There should be special prizes for their class at the next Fair.” (Awed, Amused & Alarmed, 122)

For all who help organize such community events, compete in them or volunteer, I am offering a special price for Awed, Amused and Alarmed. Go to my website; purchase one copy, and I’ll mail you an extra for the same price. It’s the Buy 1, Get 1 Free concept. Request as many as you want, but order a specific number, and I’ll add your free copies to the package (eg. order 2, I’ll send 4, but you pay for 2). This applies only to Awed, Amused & Alarmed. Order through my website at www.wordsandhistory.ca and pay with Paypal or email me with your order. The offer ends October 1!

Friday, August 8 to Sunday, August 10, 2014, 9 am – 5 pm daily, I will be at Pioneer Acres Annual Reunion and Show just north of Irricana, AB. During the event known as the “The Old Time Show Where There’s Always Something New,” you can enjoy a parade, field demonstrations including horse-drawn plowing, cultivating, and binder work. As well, check out steam-driven plowing and threshing, pioneer exhibits and races.

The first time I was at the Pioneer Acres event was a number of years ago and being there was such a pleasure. Like most women. I am not really a heavy machinery buff, but I have to say, watching all the events was fascinating. There were steam engines, threshing displays and a sincere commitment to saving our history among all the organizers and participants.

I was raised on a farm in Alberta, and my dad was interested in the history of the area. He had started farming with the threshing crew on our farm, and because harvest ended so late that year, it was too late (at least in someone’s mind) for him to go back to school. So, that harvest likely changed his life.

To purchase this book check out my website at http://www.wordsandhistory.ca

Somehow his respect for our past and the history of families in our area rubbed off on me. As a result, I wrote two “farm” books, one Threshing: The Early Years of Harvesting, and the other Monarchs of the Fields: the History of the Combine Harvester. My dad past away before the books were published, but when I am at Pioneer Acres, he will be on my mind when I meet so many people like him, people who truly care about preserving our past. And perhaps, I will meet you there, too.

If you are one of the many who help organize such community events, volunteer or share your knowledge of our shared past in other ways, I am offering a two for the price of one for Awed, Amused and Alarmed. Check out my website; purchase one copy, and I’ll mail you an extra for the same price. Order a specific number, and I’ll add your free copies to the package (eg. order 2, I’ll send 4, but you pay for 2). But this applies only to Awed, Amused & Alarmed. Order through my website and pay with Paypal or email me with your order before October 1!

With Christmas nearing, Shirlee Smith Matheson and I decided to introduce some of our books in the next few blogs. Both of us have written and published regional history, but rather than summarize content, we will share highlights during the writing of those books. We’ll treat one book each per week with the exception of December 5 when poet Bob Stallworthy is my guest blogger.

Our books are available through trade publishers and bookstores. However, the easiest way to purchase them is directly from us by email or through our websites: www.wordandhistory or www.ssmatheson.ca

For this book, I focused on the positive experiences and memories of prairie women. I had read countless books on their hardships, and I knew those hardships were real. But, I believed that most women also had found many things that were rewarding and joyful in their lives. So, I wrote about such women and included photos reflecting those experiences.

Tall and dignified-looking, Eunice (Dunny) Robertson Hanna had been a teaching colleague, and I clearly remember interviewing her. At her Calgary home, we studied old photographs and talked about her 1942 enlistment in the army and her military service. Becoming a training officer for the Canadian Women’s Army Corp (CWAC), she served at Vermilion, Alberta. As we talked, she laughed as she recalled amusements enjoyed by herself and other women during their off-duty hours. Then, she became teary, remembering friends who had died during the war.  I was fortunate to have worked with Dunny, to have attended ballets and luncheons with her for years, and to have included her and other fine women in the book. Women’s stories are filled with hardships, but, women have also enjoyed good times. So I hope you will discover those stories in my book or the books of others.

Young Blood of the Peace by Shirlee Smith Matheson (Detselig, 1991)

While living inHudson’sHope,BC, and being known as “a writer” I often received local requests to write everything from birthday poems to personal résumés. It still came as a surprise, however, to receive a call from a Catholic Sister of St. Joseph, Sister Gemma, who frankly informed me that a group of people had been discussing the career of Father Jungbluth (locally known as Father Youngblood), the Oblate priest who served four local churches in Moberly Lake (First Nations), Kelly Lake (Metis), Chetwynd (a mixed congregation) and Hudson’s Hope (mostly white).  “He has lived an interesting life,” announced Sister Gemma, “and we have decided that you should write a book about him.”

“So meet him!” was the instant response.

“We know that,” she said patiently, as if speaking to a child. And then she added a statement that changed my life.  “But you’re a writer – and writers can write about anyone!”

And so that evening I went for a walk in the snowstorm– similar to the snowy walk taken by Pierre Trudeau while he made his big decision on whether to take on the challenge of becoming Canada’s Prime Minister — and decided to take on the challenge of writing about a man I had never met, who embraced a faith, and lived a lifestyle, quite different from mine, to see what might happen.

I met him, and went on to travel with him one day a week for three years to get his story, and those of the First Nations people who comprised his parishioners.  The result is Youngblood of the Peace, a book now in its second edition. And further, I went on to write a stage play based on the book, which was produced at the Fringe Festival inEdmonton.

Father Jungbluth and I remained close friends until his passing. And that’s the story of my – and Pierre’s – big challenge, successfully met.

Posted in Books, OUR HISTORY, OUR STORIES, WRITING & PUBLISHING